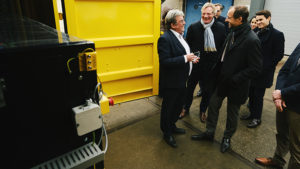 The visit was hosted by Kevin Rijke, Managing Director of Industry Park Kleefse Waard (IPKW), and was part of a bicycle tour during which the delegation met with a selected group of companies, headquartered at IPKW.

The delegation was welcomed by Wiebrand Kout (Founder & CTO) and Guido Dalessi (CEO), who gave an introduction of Elestor’s unique storage technology. It was emphasized that the hydrogen bromine flow battery technology forms the link between the seemingly two different worlds of electricity storage by batteries and hydrogen based storage applications.