“Everyone knows by now that we need energy storage, so it’s high time for a national deployment plan”

Our talk with Guido Dalessi, CEO and one of Elestor‘s early investors, is squeezed in between two important performances. At an online conference in London, he tells the world about the importance of flow batteries for energy storage. Half a day later, there is a similar request from the Dutch Ministry of Economic Affairs. Energy storage is hot, that much is clear. “Everyone is now aware that the energy transition will never succeed without the option of storage,” says Dalessi. “Now it’s high time for the government to prepare the market for this development.”

From all the different active materials that could theoretically be used to design a flow battery, Elestor selected hydrogen and bromine. This leads to a number of advantages, says Dalessi: “The choice of hydrogen and bromine is purely motivated by Elestor’s mission to build a storage system with the lowest possible storage costs per kWh. Hydrogen and bromine are available in abundance worldwide. Delivery can, therefore, not be dominated by a small group of suppliers – unlike lithium, cobalt, and vanadium.”

The company, which is located at Industriepark Kleefse Waard in Arnhem, now employs 24 people of eight different nationalities. They are mainly scientists and engineers from the chemical and mechanical engineering fields. For its efforts, the company has already received many awards, such as last year’s Pearl Award. Dalessi looks back on it with great pleasure. “It’s not that you can directly measure what such an award does to your company, but this award is especially dear to me because it didn’t need to be preceded by a pitch or anything like that. It came entirely from The Economic Board’s appreciation of us, not influenced by the pitching qualities of someone from Elestor.”

But it doesn’t stop at eternal fame, there was also appreciation in terms of money. Last year, Koolen Industries (from owner Kees Koolen, former CEO of booking.com and early investor in Uber) joined EIT InnoEnergy, Enfuro, and Dalessi BV as investors. Since then, the company got the space to expand the team and build the first systems on a real scale. A few of these are still in the pipeline before entering the commercialization phase.

Does that mean that the step to the market is getting closer? 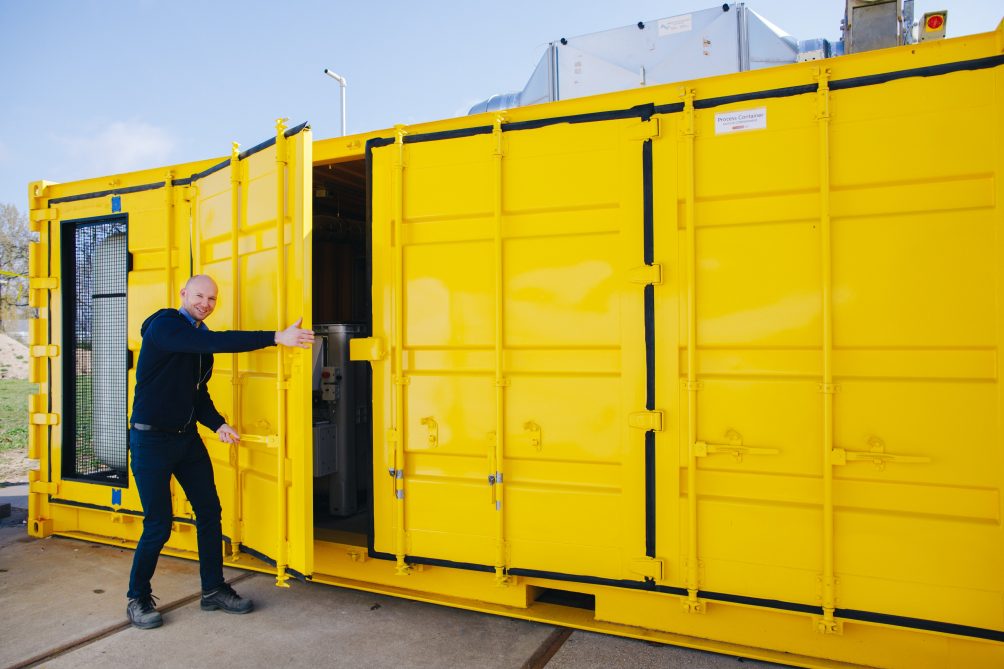 Testing system in a container

“Market interest has actually been there from the start, and it’s only growing. We are now talking to a few large companies and expect to be able to close a major deal soon. But before that happens, we will have to prove that our systems are stable. That requires testing, a lot of testing. After all, you don’t know what you’ve built until the endurance tests have been completed. The first 6 of 22 test stations to be built run 24/7 to test the lifespan of 10 to 15,000 cycles and all kinds of other properties. With this, we test the heart of the system, the membrane stacks. We invested heavily in these test facilities in 2020, because only in this way do we know what we really built and can we give the market performance guarantees. The tests also speed up the optimization process.”

How logical is it that the hydrogen-bromine combination for a flow battery will soon offer the best conditions for storing our energy?

“Do you want to know if our flow battery will be the only solution? No, it certainly is not. Lithium batteries are still useful. If you need a lot of power in a short period of time, lithium will remain important. Lithium is also ideal for mobile solutions, such as smartphones and EVs, because of its extremely high energy density. But if you want to be able to bridge longer periods of time, say from 10 hours to a few days, you need a very large capacity (in megawatt-hours) rather than more power (in megawatts). Then our flow battery is by far the best solution. The ability to bridge longer periods of time becomes more and more important as the world becomes more dependent on sun and wind. But different technologies will continue to coexist. In addition, Elestor has already started the development of its next-generation hydrogen bromine flow battery. We are currently working with Shell, TU Delft, and several other European universities on an EU-funded research project. With the awarded €4 million, we are building a hydrogen bromine flow battery that, contrary to the current concept, no longer uses membranes. The concept is based on an earlier study by MIT, with the aim of making the whole much less complex and therefore even cheaper.”

Even cheaper? Is the flow battery already cheaper then? 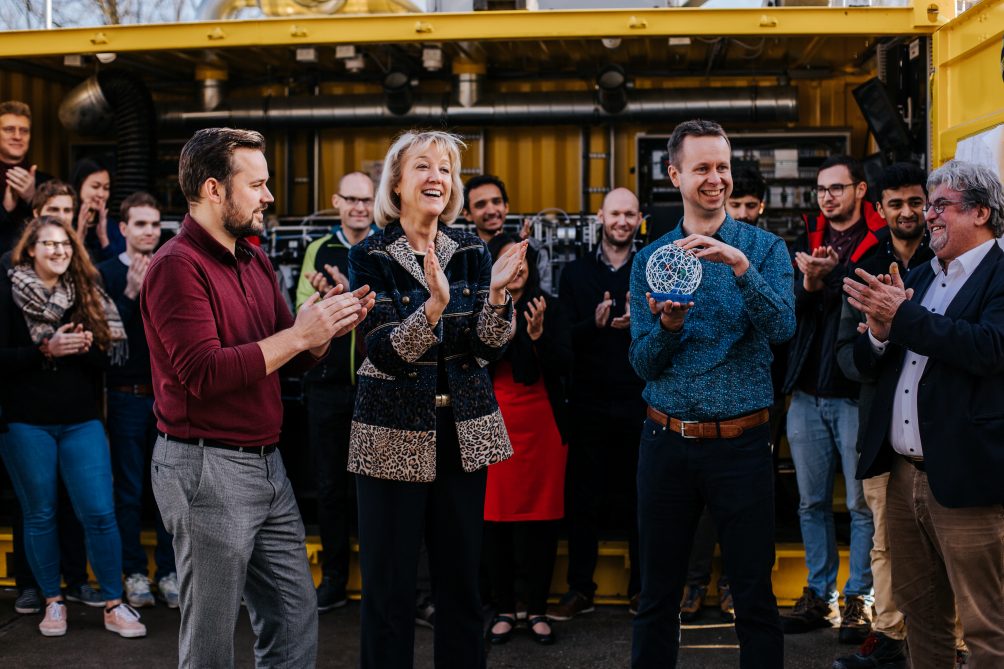 If you compare it to the alternatives, for sure. Look, if in a world without fossil fuels you always want energy, you can’t do that without storage. But in order to keep that manageable, storage costs per kWh should not exceed 5 cents. No technology achieves that structurally, except Elestor’s. But may I explain something first? Suppose that by 2050 we indeed want to be completely carbon-free worldwide. By that time, our energy needs will probably have doubled, compared to today. In order to be able to supply the world with electricity from reserves for just two days by then, a roughly estimated 500 terawatt-hours of storage capacity will already be needed. If you would want to do that all the way with lithium, you’d soon run up against limits. There are four countries that control the supply: Chile, Argentina, Australia, and China. Apart from the geopolitical consequences of this (‘Are we going from an OPEC to a LiPEC ?’), you can only fill 7% of that 500 TWh requirement with their total stock. So that simply cannot be the only solution. Bromine, on the other hand, is so widely available that no more than one-hundredth of a percent of the world’s stock is needed for those 500 terawatt-hours. At the end of the day, of course, there’s only one thing at stake: the lowest possible storage cost per kilowatt-hour for your storage. An investor wants return-on-investment, a consumer does not want to pay too much. And so it’s up to us to reduce those costs even further. To reach that goal, you have to start with materials that not only remain cheap now but also in the long term.”

The flow battery is still relatively unexplored territory. How do you find the right people for Elestor?

“Now that we are a bit bigger, it becomes easier to attract talent. But it remains difficult because companies like ASML have direct access to a lot of talent thanks to their international network, which means they empty the market. But frankly, we don’t need employees who immediately look for the thirteenth month and a company car. And all the more so the talents who really want to create something. We find them all over the world. For example, we have two Ph.D. students from the Membrane Materials and Processes Group of Prof. Dr. Ir. Kitty Nijmeijer at Eindhoven University of Technology, one of whom comes from Iran and the other from Indonesia. That does give us a lot of extra work at the IND, but we are happy to do that.”

When will the Netherlands switch to energy storage on a massive scale? 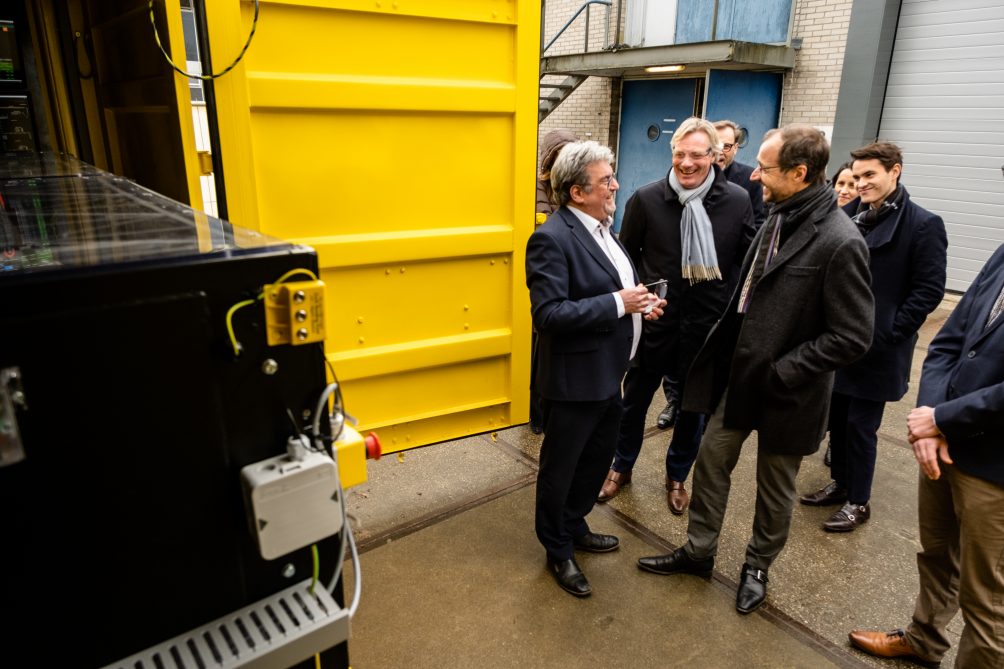 “By now everyone has realized that we need storage. No energy transition without storage. With each additional solar farm, the network becomes more unstable. And once the fossil-fuel power stations are gone, it will be a matter of urgency to absorb the peaks and troughs. So it’s really no longer a question of whether we need storage. We are doing our best to find a good solution, but the big question now is what the business case behind this can be. We’re working hard on that too, but it does require a kickstart. In concrete terms: the government has a role to play here. There is already a lot of support for technical development, such as through subsidies that we have also used. But in order to further scale up the technology and to allow the Netherlands to play a leading role internationally, a scheme is needed that stimulates the market to actually make use of it. With the Capacity Remuneration Mechanism, Belgium has a scheme that could serve as an example. The wheel must be set in motion.”